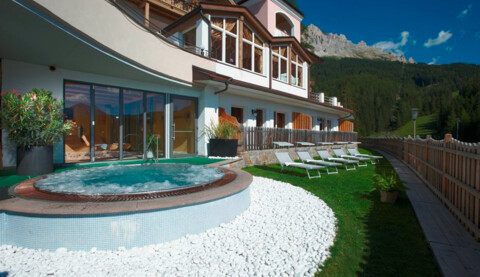 Amazing view to the mountain world

Welcome to a holiday full of cheerfulness and delight!

Martina, Karo and Lissy -this is our Dreimäderlhaus. We are hardworking and we are excellent cooks. We love to sit down with you for a chat and a glass of prosecco and we have a big heart for children as well as animals.

Living with all senses

We love it when we can pamper you and your family. And this we do with South Tyrolean down-to-earthiness and a refreshing dash of Mediterranean nonchalance.

Fine and sophisticated food is just as much part of a successful holiday as feeling welcome in the family, living in cosy accommodation and enjoying as much comfort as possible. Add to that a spectacular view across the Dolomites and a fun programfor your children: Bellissimo!

Our pride - the horses and our organic farm

Our pride are our horses. They live well looked after at our Ortnerhof Organic Farm and they are looking forward to riders of all ages.

The cosy hotel in South Tyrol

You will love the unique panorama and our sunny terrace where you can sit and watch the sunset.

The life of the hotel happens on this terrace. This is the place to come together for a cappuccino or a glass of the hotel-own Lagrein. Looking over the balcony, here you can watch the children splashing around in the warm whirlpool. The childcare facilities are only a few steps away from here. We live in South Tyrol; that means to be a big part of the Mediterranean way of life which will embrace you like fizzy prosecco.

We skilfully combine the taste of the mountains and the gusto of Italy. The flavour of the sea characterises our sophisticated antipasti and the fresh fish we serve.

We have arranged our wellness and feel-good area with much dedication and love. The saunas here carry the fragrance of wood and spruce oils, of honey and hay. A hay bath with mountain meadow hay is a wonderful experience.

One of the most beautiful places in South Tyrol

The Ortnerhof is a farm with proper farm life and is available to you and your children for adventures, playing and learning. The farm is our rural lifeline. You and your family can experience nature and how we live in harmony with the animals here. We live in the beautiful nature surroundings of the Rosengarten and we would like to give you a big piece of that for you to take home.

60 years ago: there was just one road leading from Rauth to Obereggen, with snow to the left and to the right. The road itself? Was just about cleared enough for one VW Beetle to pass, two cars would have been one too many.

The sleepy mountain village consisted of meadows and forests, a few farms and one inn – the ”Obereggen“. And that was ours; there were no more than 20 beds for guests.

The second road, from Eggen via the Gasthaus Wagger inn to the Ortner, was not passable during the winter months anyway. Obereggen was slumbering in winter sleep and was waiting for summer to arrive again while skiing was already possible in other South Tyrolean municipalities. The chirping of the birds and the mooing of the cows were the only noises here. Peaceful and quiet.

But it was exactly this peace and quiet which the Bolzano locals and North Italians were looking for when coming to Eduard Pichler (“Uncle Edl“) and his wife Lina at the Gasthof Obereggen inn. The inn: an architecturally interesting building. The inn was the only place for a stop in Obereggen, thus the proprietors of the inn did not have to fear any competition.

Tourism in Obereggen in the in the 50s was shaped by one name: Zerbi. This Lombardic extended family spent their summer holidays in Obereggen every year, apart from a few interruptions during the Second World War, since 1936. By the way, the descendants of the Zerbi Family still come to Obereggen to this day.

Back in the days, the Zerbi Family enjoyed their holiday at Ortner Edl and his wife Lina from mid-July until the end of August. The family was always accompanied by a “padre“ (priest), had found their paradise beneath the Latemar and enjoyed their holiday time away from the hustle and bustle.

The cosy and social get-togethers in the public room and the sunny panorama terrace of the old Gasthof Obereggen inn are still remembered to this day.

When winter arrived, Obereggen became even quieter than it was in summer.
Obereggen a famous ski resort? No-one would have imagined that.

The first lift facility including piste started its operation in 1972. Four more lift facilities, connecting the ski resort with Pampeago and Predazzo, were added in 1975, thus the Latemar Ski Centre was established.

The famous European Cup races have been staged in Obereggen since 1983.
And our hotel became Superior! Undergoing major reconstruction work in 2001, the once small inn was turned into a 3 Star Superior hotel.

Our individual house – a gem

The management of the Hotel Obereggen changed hands within the family in 2003. Further reconstruction work was carried out in 2005: dining hall, bio-suites, Alpine Wellness area – all high-end and in top quality.

The Latemar – a UNESCO jewel

The ski resort around the Latemar has remained a little natural paradise despite all the infrastructure and can proudly claim to be part of the Dolomites UNESCO World Heritage natural site. Great care has always been taken to integrate the lift facilities and ski pistes as gently as possible in the terrain that nature created.